Bright lights, big cities – Urbanisation and the rise of the megacity 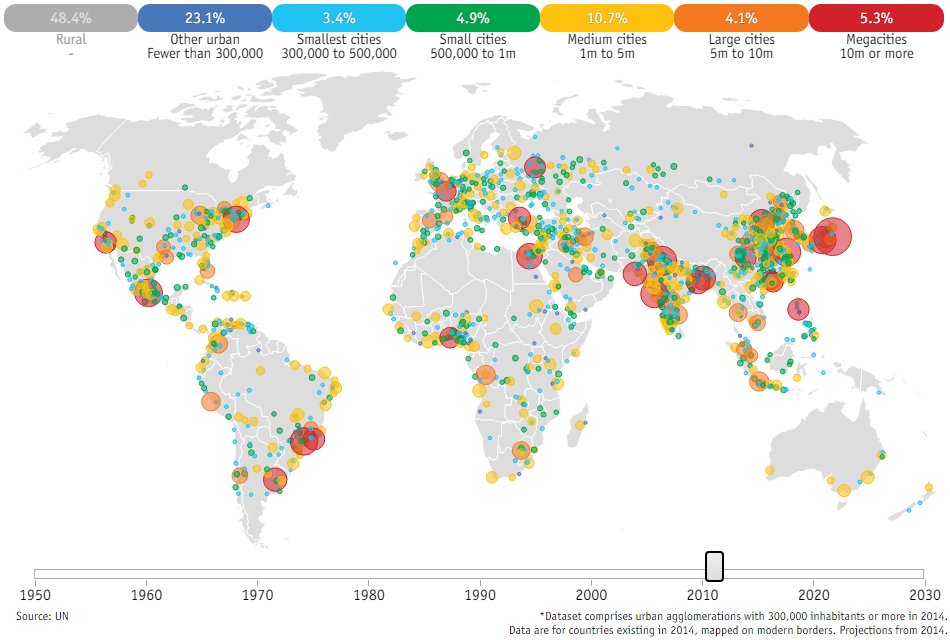 At the beginning of February 2015, somewhere in London, a maternity ward welcomed the city’s 8,615,246th inhabitant. The mayor of London reckons that the British capital has now surpassed its previous population peak set in 1939. But if it occasionally feels cramped on the Tube, the task for other city planners around the world looks far more daunting. Nearly 9% of the world’s population will be living in just 41 megacities (those with more than 10m inhabitants) by 2030. Even adding in the residents of the greater urban area, London only earned megacity status in 2013, according to the UN. Tokyo is estimated to be home to 38m people. Asia will account for over half of the world’s 29 megacities this year. But it is in Africa that some of the most rapid urbanisation is taking place. Kinshasa, the capital of the Democratic Republic of Congo, will see its population increase a hundredfold from 200,000 in 1950 to a projected 20m by 2030; Lagos, the most populous city in Nigeria, will have over 24m residents by that time.

Our interactive map above tracks global city population shifts and forecasts over time. Click the ‘play’ button at the top or move the slider to change the date; double-click/tap a country to zoom in or use the search box to hone in on a city and see a graph of its population over time.

To view the interactive map and article please visit: The Economist