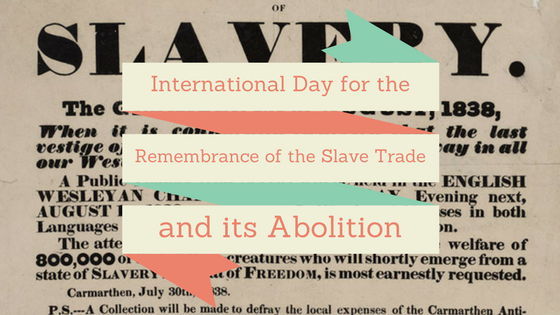 During the night of August 22 the 'Haitian Uprising' began.

The uprising led to the founding of a state free from slavery and rule by whites.

It was the largest slave uprising since Spartacus 1,900 years before.

International Day for the Remembrance of the Slave Trade and its Abolition, August 23 of each year, the day designated by UNESCO to memorialize the transatlantic slave trade.

That date was chosen by the adoption of resolution 29 C/40 by the Organization’s General Conference at its 29th session. Circular CL/3494 of July 29, 1998, from the Director-General invited Ministers of Culture to promote the day. The date is significant because, during the night of August 22 to August 23, 1791, on the island of Saint Domingue (now known as Haiti), an uprising began which set forth events which were a major factor in the abolition of the transatlantic slave trade.

UNESCO Member States organize events every year on that date, inviting participation from young people, educators, artists and intellectuals. As part of the goals of the intercultural UNESCO project, “The Slave Route“, it is an opportunity for collective recognition and focus on the “historic causes, the methods and the consequences” of slavery. Additionally, it sets the stage for analysis and dialogue of the interactions which gave rise to the transatlantic trade in human beings between Africa, Europe, the Americas and the Caribbean.