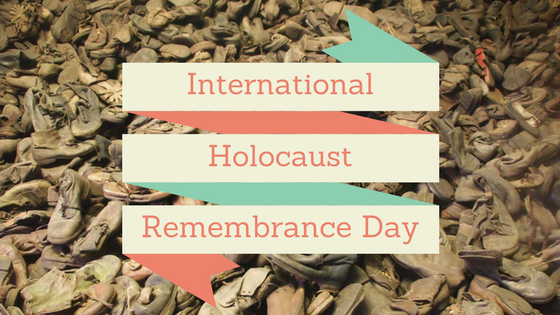 27th Jan the Auschwitz-Birkenau death camp was liberated by the Red Army.

Million Romani and disabled people died with them.

International Holocaust Remembrance Day, is an international memorial day on 27 January commemorating the victims of the Holocaust. It commemorates the genocide that resulted in the death of an estimated 6 million Jewish people, 2 million Romani people, 250,000 mentally and physically disabled people, and 9,000 homosexual men by the Nazi regime and its collaborators. It was designated by the United Nations General Assembly resolution 60/7 on 1 November 2005 during the 42nd plenary session.[1]The resolution came after a special session was held earlier that year on 24 January 2005 during which the United Nations General Assembly marked the 60th anniversary of the liberation of the Nazi concentration camps and the end of the Holocaust.[2]

On 27 January 1945, Auschwitz-Birkenau, the largest Nazi concentration and death camp, was liberated by the Red Army.

Prior to the 60/7 resolution, there had been national days of commemoration, such as Germany’s Tag des Gedenkens an die Opfer des Nationalsozialismus (The Day of remembrance for the victims of National Socialism), established in a proclamation issued by Federal President Roman Herzog on 3 January 1996; and the Holocaust memorial day observed every 27 January since 2001 in the UK.

The Holocaust Remembrance Day is also a national event in the United Kingdom and in Italy.