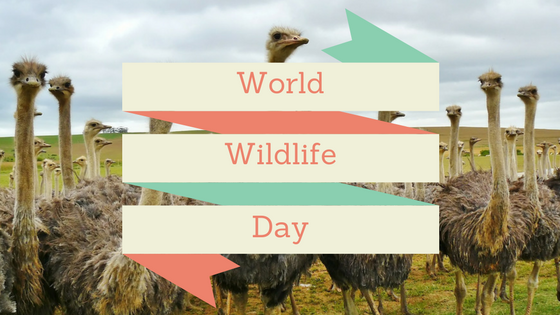 Theme is "Wildlife Crime is serious, let’s get serious about wildlife crime".

Theme is "The future of wildlife is in our hands",

Theme is "Listen to the young voices".

On 20 December 2013, at its 68th session, the United Nations General Assembly (UNGA) decided to proclaim 3 March, the day of the adoption of the Convention on International Trade in Endangered Species of Wild Fauna and Flora (CITES), as World Wildlife Day, which was proposed by Thailand,[1] to celebrate and raise awareness of the world’s wild fauna and flora.

In its resolution,[2] the General Assembly reaffirmed the intrinsic value of wildlife and its various contributions, including ecological, genetic, social, economic, scientific, educational, cultural, recreational and aesthetic, to sustainable development and human well-being.

The General Assembly took note of the outcome of the 16th meeting of the Conference of the Parties to CITES, held in Bangkok from 3 to 14 March 2013, in particular Resolution Conf. 16.1[3] designating 3 March as World Wildlife Day, in order to celebrate and raise awareness of the world’s wild fauna and flora, and recognized the important role of CITES in ensuring that international trade does not threaten the survival of species.[4]

The General Assembly requested the CITES Secretariat, in collaboration with relevant organizations of the United Nations system, to facilitate the implementation of World Wildlife Day.