International Day in Support of Victims of Torture 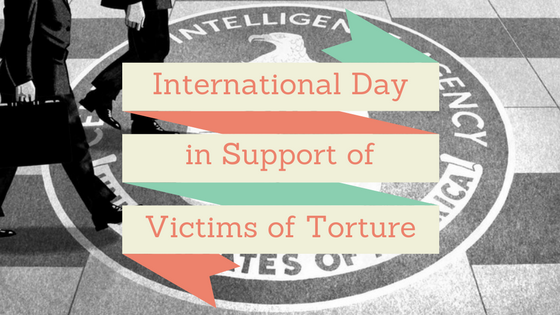 Theme is: "Right to Rehabilitation".

There is evidence that 79 countries practice torture.

The United Nations International Day in Support of Victims of Torture – 26 June is held annually on 26 June to speak out against the crime of torture and to honor and support victims and survivors throughout the world.

The day was selected by the United Nations General Assembly for two reasons. First, on 26 June 1945, the United Nations Charter was signed during the midst of World War II – the first international instrument obliging UN members to respect and promote human rights. Second, 26 June 1987 was when the United Nations Convention against Torture and Other Cruel, Inhuman or Degrading Treatment or Punishment came into effect.

The decision to annually observe the International Day in Support of Victims of Torture was taken by the UN General Assembly at the proposal of Denmark, which is home to the world-renowned International Rehabilitation Council for Torture Victims (IRCT).[3]

The first 26 June events were launched in 1998.[3] Since then, nearly 100 organizations in dozens of countries all over the world mark the day each year with events, celebrations and campaigns.[4]

On 16 July 2009, the International Day in Support of Victims of Torture was chosen as a public holiday in Bosnia and Herzegovina.[5]