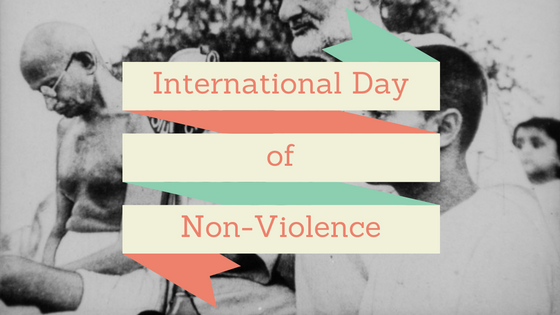 Mahatma Gandhi was born on the 2nd October.

On the 30th January Mahatma Gandhi was assassinated.

UN declares this day to be the International Day of Non-Violence.

The International Day of Non-Violence is observed on October 2, the birthday of Mahatma Gandhi. This day is referred to in Indiaas Gandhi Jayanti.

In January 2004, Iranian Nobel laureate Shirin Ebadi had taken a proposal for an International Day of Non-Violence from a Hindi teacher in Paris teaching international students to the World Social Forum in Bombay. The idea gradually attracted the interest of some leaders of India’s Congress Party (“Ahimsa Finds Teen Voice”, The Telegraph, Calcutta) until a Satyagraha Conference resolution in New Delhi in January 2007, initiated by Indian National Congress President and Chairperson of the United Progressive Alliance Sonia Gandhi and Archbishop Desmond Tutu, called upon the United Nations to adopt the idea.[1]

On 15 June 2007 the United Nations General Assembly voted to establish 2 October as the International Day of Non-Violence.[2] The resolution by the General Assembly asks all members of the UN system to commemorate 2 October in “an appropriate manner and disseminate the message of non-violence, including through education and public awareness.”[3]