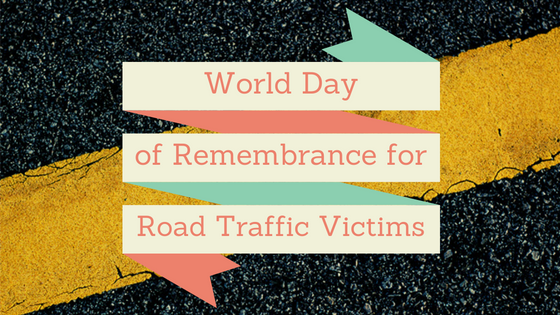 of victims are “vulnerable road users”: pedestrians, cyclists and motorcyclists.

The World Day of Remembrance for Road Traffic Victims takes place on the third Sunday in November every year as the appropriate acknowledgment of victims of road traffic crashes and their families. It was started by the British road crash victim charity, RoadPeace, in 1993 and was adopted by the United Nations General Assembly in 2005.

In 1993, the first day of remembrance which was organised by Brigitte Chaudhry, Founder of RoadPeace. In 1995 the General Assembly of European Federation of Road Traffic Victims added its support and by 1998 the event was being held in a number of countries including Argentina, Australia, Israel, South Africa, and Trinidad[1] in addition to the United Kingdom. The World Health Organisation added its support in 2003 and in 2005 the United Nations General Assembly invited all nations to observe the day ‘as the appropriate acknowledgment of victims of road traffic crashes and their families’.[2][3]

In 2007 events were held in 18 countries;[4] it was marked by candlelight parades in Israel, a multi-faith gathering in Australia, theatre performances in Mexico, and a seminar in Japan.[5]

In 2009 events were held in 30 countries.[7] Canada’s Transport Minister John Baird offered condolences to those affected by the estimated 3,000 fatalities and 200,000 injuries from road crashes that occur every year in Canada.[8] In England a service was held in Canterbury Cathedral[9] and in Ripon Cathedral[10] Some 1,000 people attended a service in Knock Shrine in Ireland[11] Pope Benedict XVI prayed for “all who have been killed or injured in road accidents”.[12] Services were also held in Barbados[13] India,[14] Namibia[15] and many other places.

In 2015, 15 November, FEVR‘s Former President Brigitte Chaudhry MBE & FEVR‘s President Jeannot Mersch presented on 15 November 2015 in Brasilia with the ‘Prince Michael of Kent International Road Safety Award‘ for FEVR’s “part in the creation, development and promotion of the World Day of Remembrance for Road Traffic Victims over the past two decades”